It’s only been seven years since the launch of Xiaomi’s first smartphone in August 2011. Now, the Beijing-based firm is getting ready to raise an eye-watering tech IPO of at least $50 billion — expected to be the biggest public listing the world has ever seen. That’s double Alibaba’s record-breaking offering of $25 billion just three years prior.

Valued at roughly $46 billion following its last funding round in 2014, Xiaomi became the most valuable private tech company at the time. Helped by its flash sales and savvy social media campaigns, the Chinese smartphone maker is at present the third largest unicorn just behind ride-sharing Didi Chuxing and Uber , according to data compiled by CB Insights. While the hardware maker hasn’t commented on the timeline of the deal, founder and chairman Lei Jun said at the recent World Internet Conference in Wuzhen that he’s looking to “transplant China’s business ideas into other countries.” A well-timed and successful IPO could bring in much-needed ammunition for the expansion.

After some ups and downs the past couple of years, the company was known as “Little Rice” in Chinese made some huge strides in 2017. Smartphone sales edged past Apple in its home market China in the second quarter, thanks to new models and its direct-to-customer sales method.

While a majority of Xiaomi phones are sold online–a sales channel strategy the company deployed early on–the opening of physical stores has accelerated this past year. The retail locations provide more touch points for consumers to get to know the product and to integrate after-sale services. Plans are to open 1,000 “Mi Home” venues by 2019–twice the count of global Apple stores. Lei believes that “new retail” combined with e-commerce will be the way to reach the target of shipping 100 million smartphones annually by 2018 — a goal that he has set for performance.

But domestic competition remains steep–squeezed between higher-end Huawei, and lower-end handset makers Vivo and Oppo. Seed investor Hans Tung of GGV Capital is not worried though, crediting Xiaomi’s ecosystem-based model for giving the brand a leg up. “They’re firing on a lot of cylinders, and have done extremely well in China, as well as in India,” he said in a CNBC interview.

Xiaomi has made significant inroads in India growing market share by over 290% in the third quarter year-over-year. Market researcher IDC attributes the surge to brick-and-mortar expansion in Mi Homes, Mi authorized stores, as well as partnerships with a major retailer.

Online, the handset maker hit the sweet spot by targeting smart consumers with the best mid-segment “value-for-money” price band to drive volume sales. It’s currently the second largest smartphone seller after Samsung in the subcontinent. While three out of the top five best selling models in India are from Xiaomi, Counterpoint Research doesn’t rule out the likelihood of the Chinese vendor becoming the local market leader in the near future.

Neither does a more bullish Canalys analyst Rushabh Doshi: “We predict Xiaomi’s continued go-to-market innovations will allow it to overtake Samsung within a couple of quarters.” IDC figures show Xiaomi commanding 17% of the Indian phone market, just a few percentage points away from taking the lead. 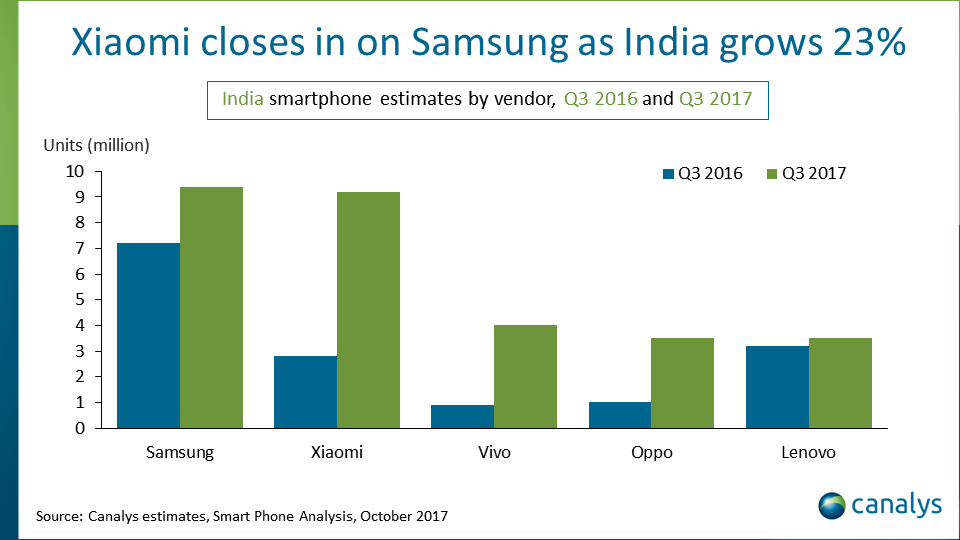 On the heels of its India experience, Xiaomi officially launched in Spain in November. The brand chose Madrid as its gateway into Europe given it already has a loyal user fan base that historically bought exclusively online. The company will start with two authorized Mi stores and local partners for distribution and customer support.

Aside from a major push for geographic reach, success of Xiaomi was helped by a product line expansion of over 80 offerings, “The word of mouth effect that users have and become fans of their product are across the board not just on smartphones, but also on TVs, on a lot of gadgets for home,” says Tung. According to IDC’s latest estimates for wearable technology, Xiaomi tied first with U.S.-based Fitbit in shipping volume, both beating the Apple Watch. The newcomer also introduced smart shoes earlier this year, but only targeting the Chinese market.

The latest development though comes as a partnership announcement with Baidu on AI and IoT (Internet of Things). The pair will leverage the search giant’s DuerOS to enhance the user experience of Xiaomi’s electronics and smart devices.

Still, with all the company has achieved in the past year, the valuation of a mega IPO is questioned by Simon Lee, CUHK business school professor. ” My feeling is $50 billion is too high when taking into account its sales performance and profitability.” Comparing market capitalization versus revenue, “It is not justifiable at all,” says the senior lecturer of accountancy. But the timing couldn’t be better from an issuer standpoint.
“Markets are still at their highs… the whole purpose of an IPO is to raise money,” Lee says.

KFC Waffle Double Down Makes an Iconic Return in Canada

A Hidden iOS Feature Shows How Much Time You’re Wasting On...