This time of year isn’t normally great for Apple’s hardware sales, but the company’s recently released Q3 earnings have at least one pleasant surprise. In addition to raking in $45.4 billion in revenue over the past three months, Apple also said it sold 41 million iPhones and 11.4 million iPads. That works out to an apathetic growth of 1.5 percent for iPhones over last year, but the iPads? We’re looking at a jump of nearly 15 percent since last August. This marks the first time iPad sales have grown year-over-year since the halcyon days of 2013 as well. 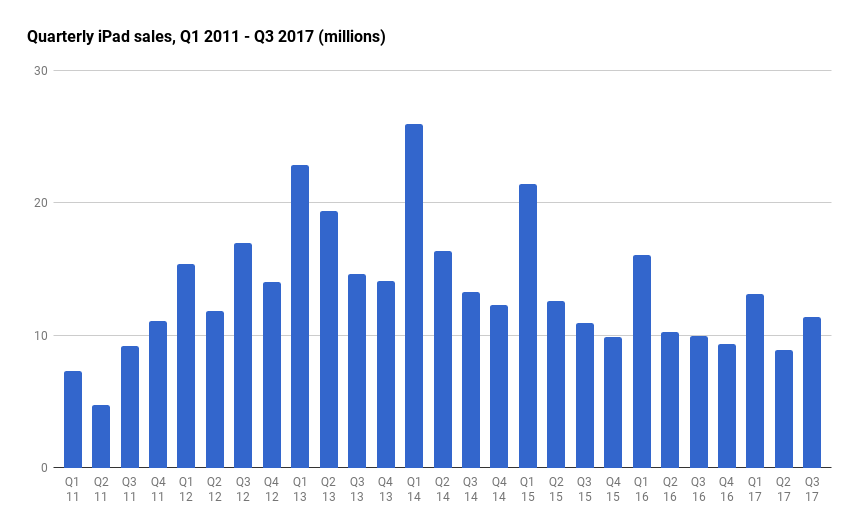 The seasonality of Apple’s fortunes is well understood — Q3 is generally pretty quiet as people gear up for the announcement of new products in September. (The financial party really kicks into high gear in Q1, when Apple the results of its typically-bonkers holiday sales period.) Since lulls like this are relatively easy to foresee, Apple has to be proud that its service revenue — the money it makes off things off iTunes and App Store purchases, Apple Music subs, iCloud and more — is also up. Altogether, those purchases add up to $7.26 billion, up 22 percent since this time last year. Apple CFO Luca Maestri specifically pointed to Apple Music and iCloud storage as two areas that saw notably strong growth.

And then there are all those other products, like AirPods, Watches and more, that Apple handily lumps into a single category called “Other Products.” This time, the company reported $2.75 billion in revenue, which is up a whole lot from last year but not so much from last quarter. The year-over-year jump is to be expected since Apple’s surprisingly famous AirPods weren’t available until the winter of 2016; the very slight dwindle since last quarter could mean people aren’t purchasing AirPods quite as much as before, or that Apple is (still) having trouble producing in large enough quantities.

CEO Cook did, however, point out that Watch sales were up 50 percent year-over-year. Regrettably, Apple is still more than happy to avoid breaking down revenue into slices for its wearables and accessories, so it’s hard to say for sure which products contributed most to this segment’s growth.

Inflation in Pakistan – A shortsighted approach

iPhone 8 facial recognition technology might be one step ahead